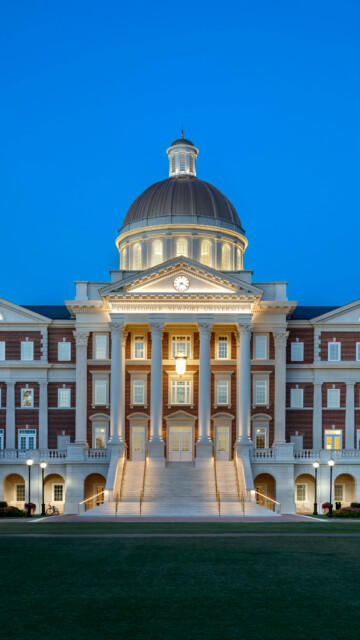 “We’re proud to have our products featured prominently in this stately building, as well as the university’s Rappahannock Hall finished a few years ago,” said Jeff Kibler, architectural and commercial manager for Weather Shield. “The monumental windows we supplied for Christopher Newport Hall highlight our vast custom capabilities and demonstrate the phenomenal products we can manufacture when architects share their visions and plans with us.”

Completed in the summer of 2015, Christopher Newport Hall is a $42-million, 81,000-square-foot facility that houses all of

the university’s administrative offices, including admissions, registrar, financial aid, housing and career planning, among others. The facility is marked by an expansive set of steps, and a picturesque copper dome lined with 10’-7.5” tall arched picture windows filling that the interior with natural light.

While striking in its appearance, Christopher Newport Hall may be more impressive because of its less-obvious features. The university was intent on pursuing LEED certification through the U.S. Green Building Council when it initiated the project. Through its plans and product specifications, Glave & Holmes, university’s architect of record, ensured the construction, maintenance and operations of the building minimized its environmental impact.

According to Kibler, one particularly challenging aspect of the job was creating the exterior casings on all of the windows and transoms. The architectural specifications called for two distinctively different looks that would match trim used on other buildings on the campus. One of the casing profiles was nearly 6” wide. To bend the casings to match the stone arches, the casings were designed as a nesting, three-piece system. Altogether, nine custom aluminum extrusions were created to achieve the look.

The sizeable project was completed, start to finish, in just 16 months and in time for the 2015-2016 school year. LEED certification is currently in progress.